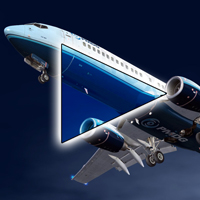 PMDG has just released a couple very impressive videos on their Facebook page! These are the first videos of their up and coming 737 NG for FSX, which is proving to be the greatest airliner addon to ever come onto the market.

These videos prove, once again, that PMDG will be ahead of the competition with quality of design and ingenuity; seeing, hearing and perhaps ‘feeling’ things we’ve never seen in flight simulator before.

Here is the first video:

Overall we were very impressed with this particular video. It’s a good length, and basically shows mostly stuff that would be unnoticed and brushed over by other developers. But, we see the entire menu structure of the aircraft now inside the FMS, which means no more menu bar, and failures/options ‘on the fly’, among other things.

We also see the impressive speed of the video, meaning the frames-per-second (FPS) are great.

Just as you start to get a bit bored with the clicking around, the engines are spooled up, and we’re taxied to a ‘line up and wait’ position on the runway.

Now we start to see some things we’ve NEVER seen before!


A clickspot is pressed, and the HGS (also commonly known as a HUD) is popped out. Casting a rose colored ‘aura’ on everything behind it, and having all the information right there, you get the feel that this is just like the real thing.

But then the most impressive part of this video takes place…

The landing lights come on, and we see ground illumination like nothing else ever witnessed in flight simulator. This is similar, in small part, to some other developers technique, but I notice that these are the most realistic of all the landing lights.

And now, everything ready to go, it’s time for takeoff.

Engines spooling up, things rattling and coming alive, we then hear it… the realistic roar of the CFM engines. WOW! I’ve never heard realistic cockpit sounds like this. It started with the clicks and things here and there early in the video that sounded great, but the engine sound is the best PMDG has ever done… or any other developer for the airliner market for that matter.

Someone FINALLY captured that distinctive sound. The ‘Buzz-saw’ as some call it.

Lifting off the runway, it’s pure bliss from there. It just makes me want to jump in this aircraft and do this exact same thing. There’s something magical about rotating a jet careening down the runway. Those few seconds, not just in jets, is pure magic to me every time I take an aircraft off.

Onto the second video:

This video is much more simple, and I didn’t notice a whole lot of extras except for one thing that I’ll mention in a second.

First, the overall feel throughout the video is very smooth. In a maneuver like this, with such a tough crosswind, any hesitation in FPS and you’re looking at blowing right off the side of the runway. But, you don’t see that here. Nice and steady! (albeit, the aggressive nature in which the maneuver had to be performed and the aircraft had to be stopped).

In fact, guess what? It’s ORBX. This is located inside the PNW scenery.

Alright, now that we basically have a smooth operating complex airliner inside ORBX (Show me something else that can do this?), one thing I loved was how during the crosswind the vector on the HGS was located right where the aircraft was going to be on the runway. Because the wind is from the right and it’s crabbing that direction, it’s far off to the left.

How easy does that make crosswind approaches? I’d say it’s a great added safety feature, and you can see here that the system performs as it’s real counterpart, and doesn’t miss a beat.

I speak for all of AOA, and I’m sure many of our trainees when I say we’re excited to get this aircraft under our own control. That day can’t come soon enough, and with the video training we’re doing, we are more than excited!

What did you guys think of these videos? Did you notice anything great? Will you be getting the PMDG 737 NGX and our video training?

This article was posted in 737, Blog