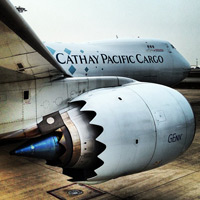 These days, it’s not that common for me to be able to do a flight without some sort of connection to work. Yes, I record and produce on almost every flight I do in the simulator. This weekend was different, however.

First, I started off following my friend’s flight from Anchorage to Honolulu. This is a non-stop flight in a Boeing 737-800, and operated by Alaska Airlines. And right now, I’m sharp on this 737. Let’s just say I’ve had a lot of practice. I had a bit of a challenge entering in all of the LAT/LONG waypoints in the route, but for the most part it was a very smooth flight, and enjoyable, too. Besides, I got to do it in the 737NGX from PMDG, a near perfectly modelled rendition of Boeing’s 737NG. Or is it perfectly modelled?…

After having such an enjoyable time, not really having to worry about creating a lesson but just doing a flight, I decided to do another flight. After seeing the picture below, I thought it’d be really great to take out the PMDG 747-400 with the -8F skin they have, and fly a ridiculously long route. After some research, I found a flight going from Anchorage to Hong Kong in an actual -8F, and knew I had to do it. 10+ hours of bliss. Of course, I’d be getting my crew rest during the majority of the flight. 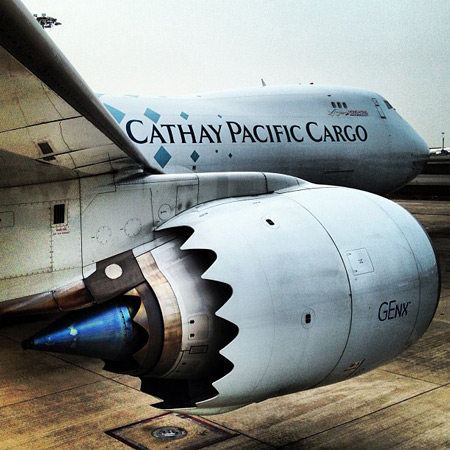 I got everything loaded up, even got the correct livery from PMDG, and went through some painful control setup and a bunch of other procedures to get the sim workable. What was meant to be a “get-in-the-air-quick” flight ended up being 3 hours of preparation.

Now comes the interesting part… The sim was HORRIBLE! The 747, compared to the 737NGX I had come to know and love, was laughable in it’s low quality. It almost wasn’t worth messing with… almost. I did want to do the flight though, and at this point, I was intrigued at how far behind this 747 sim is.

It’s been about 7 or 8 years since the PMDG 747 was released. Originally released for FS2004, it was later released for FSX. Either way, how could I had been so mislead at the time? Why did I think at the time of the 747 release, that it “can’t get any better than this!”?

Granted the PMDG 747-400 is still the best simulation for that model on the market. PMDG has, however, announced that they will be doing a version 2 of the 747. That’s great, because now we won’t have to throw up in our mouth every time we go from flying the NGX to flying the 747.

Other models are left out of this for obvious reasons. I think the MD-11 still has plenty of beauty to it, and it operates incredibly well. I love that aircraft. The JS41 is quite great as well. And there are any number of other simulations out there that I’m sure you’re aware of, that are noteworthy. (but I’m not going to note them all)

I do believe there will come a time when we look back on the 737NGX, and in a way, laugh as we are now with this 747-400. That is really hard for me to believe, but I find no reason why technological advancements would stop today, and we’d be stuck with the simulator we have now. What kind of things will we see? Here are a few things I thought of this morning:

Apple is well known for pioneering the ‘retina’ market on their devices, and they’ve now moved into PCs and Laptops with their recent MacBook Pro Retina. Can you imagine how incredible it would be to not even be able to see a pixel in the cockpit or sim? Everything simply looks lifelike, and completely smooth. Crystal clear, bright. This would instantly blow away anything we had previously seen.

Virtual Reality Goggles
You’ve seen it before. Some doofus with those 3D goggles around his eyes, looking around. He looks like a fool from the outside, but I’d be the first one that would want to be fooled by the 3D world on the inside. This kind of technology hasn’t been widely adopted, or even that great. the field of vision is quite small. But that is all changing. Just check this out.

Can you imagine what it’d be like to get in the simulator, and have it look exactly like a full on Hollywood rendered 3D scene, yet it was all manipulatable by you? I can! That would be incredible. And, it’s no doubt in our future at some point. We will get there, that’s just the way it is. This kind of 3D brings on a whole different kind of environment, which I’ll now mention below.

Day looks horrible, night looks horrible, and the shadows aren’t really shadows. That’s Flight Simulator now as we know it. I know I’m not the guy to get in there and code this stuff, but one day, we’re going to see a flight simulated world where the sun looks hot on the tarmac in Dubai, a mirage forming across the taxiways; or the dim and desaturated look of an overcast day, bland and uninspiring but incredibly realistic.

So ask yourself, is this what we’re doing right now?

How long will we have to wait for these things? Time is the only master that can tell. I can assure you that these years will fly by, quite literally in our sick-twister-aviation-addicted minds, and we’ll look back with awe at where we’ve come from.

Join the Conversation!
What do you think the future will bring?