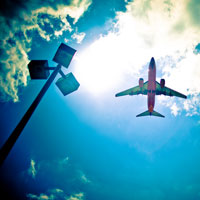 Most professional pilots face tremendous pressure. Whether it be from their airline, passengers, or the corporate big-wig they fly for, safety sometimes takes a backseat to getting ‘there’ on time.

I want to relay one such story, relayed to me by a friend, that is a prime example of the stupidity that can come from needing to ‘get there’.


Sunny and cool, the Rocky Mountain Spring was bringing out the greens from the Winter cold, and with it clear skies and a perfect day to fly.

The destination today, Los Angeles. Newport to be exact. All the way from Salt Lake City, it’s a decent sized trip for a single engine, turbo aircraft.

From pulling the aircraft from the hangar, to taxi, to pre-takeoff checks, the aircraft was finally airborne for it’s IFR journey to the City of Angels. The coasting will be clear, except for some ‘soup’ in the LA area.

Half way through the journey, over Southern Utah, with a loud chime, and plenty of red flashing notices, Alternator #1 fails, which will eventually discharge for the main battery bus. In other words, some major components will start becoming inoperable.

The pilot, sitting next to his corporate, ambition driven boss, is urged to move on.

Of course the pilot in command has the final say. His decision is to press on as well. Besides, most of the instrumentation is working correctly, and the aircraft is still is decent flying shape…

The journey continues southward, over Las Vegas, then the high deserts of California. Along the way, the instruments and components start to go inoperable, one-by-one, eventually leaving the situation looking pretty grim.

But, they have a big meeting, and they just can’t miss it.

The aircraft moves on with perilous intent.

Now with half the instruments, no use of autopilot, and plenty of other systems inoperable, it’s time for the arrival into Los Angeles. Planning for the partial panel arrival, the pilot notices something on the Alternator Failure checklist that makes his heart jump; “Prepare for possible manual gear extension.”

Out of all the things that could go inoperable, the landing gear, tied to this battery bus that was being charged by the failed alternator, is now considered useless.

Reaching back to take off the plastic/velcro cover just behind the seats, where revealed is the manual gear extension handle, the handle won’t budge. It’s stuck. Completely and totally unable to be moved from its position.

The plastic covering that the seats sit on, and what covers the control cables and other components, was placed incorrectly over the manual gear extension handle by maintenance during the annual inspection.

With no Leatherman or knife onboard, it was looking like the saving grace would be a pair of nail clipper (I kid you not), where, if chipping away furiously enough, they MAY be able to free the handle before needing to land.

With no fuel to spare, no second chances, the situation is dier.

But then the pilot thinks;

“I may as well try the gear handle”.

He grabs the handle, pulls it out of detent and down:

Wow, it worked after all!

The rest of the approach, ceilings well above minimums, goes without much trouble, but with no room for error with only 20 minutes fuel left. And, on less than the required instrumentation.

The boss man got to his meeting, perhaps a little shaken, but he got there.

But it could have gone so much worse.


Looking back on this story, there are many lessons to learn, but one sticks out to me more than anything else: This is the perfect case of ‘GetThereItis’.

This infectious disease, which every pilot has had, is one of the most deadly in all of aviation. It cripples the pilot’s ability to think clearly, and pushes him/her to do things they wouldn’t have otherwise done.

If the anecdote had been used in this particular story, the pilots would have landed at a VFR airport, suitable for repairs (if one were available) right near where the alternator failed. Pressing on into IMC (Instrument Meteorological Conditions), especially over the span of hundreds of miles when many stops could have been made, was a horrible idea.

It nearly cost these two individuals their lives. Because of a meeting.

These fellows are lucky to be alive.

This threat is real, and to a certain extent I can understand the drive to ‘get there’. I’ve been away from my woman for weeks, and was so anxious to get home that I must admit even I had made poor decisions early in my career. And I’m still not cured of it.

Outside reason is risking our lives for something as trivial as a meeting, or an earlier rendezvous with a significant other.


Here are 5 Tips for Overcoming Get-There-Itis:

Join the Conversation!
How can we make better decisions in Flight Sim? How do you fight ‘Get-There-Itis”?

This article was posted in Blog, Flight Simulator, Real World