10 Power-House Aircraft Made in the US of A 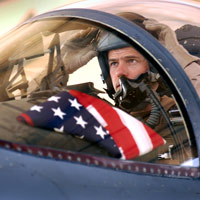 Have you ever put any thought to what the best aircraft Made in America are? On the Eve of the 4th of July (America’s Independence Day) I got to thinking about what some of the most influential and historic aircraft that were designed and Made in the USA.

How does one choose from a long list of aircraft to come up with some of the best? For me, I simply decided to pick what came to mind, while keep a good mix between military, commercial and general aviation aircraft. (Disclaimer: These are highly biased opinions based on my own experiences)

You won’t see too many Gulfstream Aircraft around. Although they may not populate the skies like Citations (coming next for that very reason) they are some of the most technologically advanced aircraft in all of aviation.

For example, did you know that Gulfstream was the first to develop the heads up display for civilian aviation? Even then much of their technology was used throughout military aviation. What you see in a Gulfstream today will be in the civilian aircraft of tomorrow.

Gulfstream is simply known to have absolutely incredible technology on their Flight Decks. Just checkout the cockpit of the G650:

So if you’re in the market for an incredibly expensive jet, and you don’t quite want to go the way of the BBJ, then checkout the Gulfstream. It’s the next in line as far as desirability (if not #1), but comes with a hefty price tag.

Some facts on the latest in the Gulfstream fleet, the G650:

If you can’t throw down for a Gulfstream, Cessna is not a bad choice at all. You could even consider saving some coin so you can actually fuel up the engines by just going with Cessna in the first place! Their latest and greatest model (the Cessna Latitude) comes in at a cool 25 Million.

Cessna Citations come in a wide variety of shapes and sizes. From the very popular Cessna Mustang, to the Citation X and Latitude, these business class jets can serve many missions, and a wide variety of purposes. Based on what type of business you run, whether that be a regional business with short flights, or an international enterprise requiring incredible endurance overseas, you can find a Citation model to fit your mission.

I’ve had the opportunity of flying in a Citation II+. It was an incredible aircraft, and had a very desirable, high rate of climb.

Here are some facts about perhaps the most sexy model, the Citation X:

I have a love affair with Bonanzas. I have hundreds of hours in the aircraft, and have become very familiar with it’s operations and capabilities. Naturally, I feel it belongs on this list.

And here is why. Watch this video:

The Bonanza is a workhorse. The aircraft is not made from modern techniques with laminar flow wings and so on. It’s built on essentially the same trusty aircraft they’ve been using since the 1940’s when it was introduced. Not much has changed in that time.

Starting in the 40’s, these aircraft quickly became the aircraft of status. All the celebrities were buying them. They unfortunately got the nickname ‘doctor killers’ because of an issue with the V-Tail models, which was fixed of course.

These days, if you want to get into a Bonanza, you’ll find a modern platform of avionics placed inside that same trusty airframe. If you want to get really crazy, you can even get a turbo-normalizer which will allow you to cruise around in the Flight Levels.

Some facts on the Bonanza:

Have you ever seen an F-22 at an airshow? Below is a video showing you just how impressive aircraft this aircraft is. But if you’re the enemy, you’ll never see it. In trials, the F-22 could take out 5+ F-15s before the F-15s could even detect it was there. Impressive because? F-15s are not puny aircraft to begin with. And the stealth technology on the F-22 actually works.

Checkout this montage of clips that shows just how incredible the aircraft is:

This aircraft isn’t so much a fighter (in fact, it really isn’t at all) as much as it is a logistical nightmare for the enemy. Much like the C-130 we are all familiar with, the Boeing C-17 Globemaster III can land on a variety of surfaces. It also houses 4×757 engines on it’s smaller body, meaning it can takeoff in a very short distance, and land in an incredibly short distance (as fast as a single engine Cessna)

Are you not impressed? I am!

I am certainly not as impressed with modern aviation as I am with the guys that flew during WWII. Using aircraft on the edge of technological capabilities, and still using pure aviator skills and instincts, young pilots battled in the skies in an astounding physical and mental feat.

The P-51 was one of those aircraft that stands iconic when thinking of WWII, and the Greatest Generation that flew the aircraft during this great war.

The P-51 was the best of the best in the American fleet. That’s not to say it didn’t have it’s equal enemies and allies, in the BF-109 and Spitfire respectively.

It was, however, instrumental in winning battles during the USA war effort.

Can you just imagine those fighting conditions? No missiles, no autopilot, no real HUD, little navigation. It was just raw skill that would win these matches.

This scene from Empire of the Sun always stood out to me as the epitome of my feelings for the P-51:

Who doesn’t know what the B-17 is? This aircraft littered the european skies during WWII, mounting some of the most impressive air raids in all of history. To get a taster, just watch the movie Memphis Belle. It’s heart wrenching, frightening, and unfortunately, completely realistic. Crammed in a tin-can, these young soldiers battled against skilled German pilots, and relentless flak.

I’ve always had a bit of a crush on the B-17. I was fortunate recently to be able to see the Memphis Belle. This is the aircraft used in the movie. Oh how I wish I could have gone up flying!

Did you know the B-17 was the first aircraft to get checklists? I always thought that was really interesting. Essentially, the pilots would forget to disengage the elevator lock, takeoff, and crash because there wasn’t any pitch authority. As a result, checklists were introduced and immediately the incidents were almost completely eliminated.

Watch this video. Your heart will be full. This B-17 pilot, now very old, sheds tears as he talks about his experiences. You’ll be chocked up:

Instantly, the Boeing 747 comes to mind. What a machine! Large for the time it was introduced in the 60’s, this 747 model is still alive and vibrant today, with the new 74-8F and 74-8i. What an incredible and timeless machine this truly is!

Not enough can be said about how much of an impact the 747 has had on the growth of the commercial airline industry, and how many new horizons it opened up as a result.

If you REALLY want to waste some time, here is an awesome documentary on the 747-8.

Link to Specs and Prices

Why did I rank the 777 ahead of the 747? Personal preference, I suppose. I just consider the Boeing 777 to be the darling of the Boeing Fleet, and the pinnacle of it’s technology. Don’t get me wrong, I really love the 787. I’m simply using the 777 as an example of an aircraft already in heavy service.

Why am I impressed with the Boeing 777? First of all, she’s just beautiful! Second, the engines on the aircraft, the GE-90, is an impressive engineering advancement all in it’s own. As a result, third, is the ETOPS capability of the aircraft. This has opened up many new horizons by allowing for more direct routes.

Soon, for us flight simmers, we’re going to see the PMDG 777 for FSX. We cannot wait, and we know you are super excited too! Of course, we’ve been working hard on our 777 Training, but our love for the machine has more to do with it’s impressive real-world counterpart, than our bias.

Link to Specs and Prices

Where would be be without the original powered flight by the Wright Brothers? This is #1 for an obvious reason: It was the first- and that started ALL of last 100+ years of aviation advancements that we’ve seen.

Granted, the initial flight wasn’t that long. Just 120 feet. Nowhere close to the length of the 747.

I really like the story of the first flight from Wikipedia:

“In camp at Kill Devil Hills, they suffered weeks of delays caused by broken propeller shafts during engine tests. After the shafts were replaced (requiring two trips back to Dayton), Wilbur won a coin toss and made a three-second flight attempt on December 14, 1903, stalling after takeoff and causing minor damage to the Flyer. (Because December 13, 1903, was a Sunday, the brothers did not make any attempts that day, even though the weather was good.) In a message to their family, Wilbur referred to the trial as having “only partial success”, stating “the power is ample, and but for a trifling error due to lack of experience with this machine and this method of starting, the machine would undoubtedly have flown beautifully.”[57] Following repairs, the Wrights finally took to the air on December 17, 1903, making two flights each from level ground into a freezing headwind gusting to 27 miles per hour (43 km/h). The first flight, by Orville, of 120 feet (37 m) in 12 seconds, at a speed of only 6.8 miles per hour (10.9 km/h) over the ground, was recorded in a famous photograph. The next two flights covered approximately 175 feet (53 m) and 200 feet (61 m), by Wilbur and Orville respectively. Their altitude was about 10 feet (3.0 m) above the ground.[58] The following is Orville Wright’s account of the final flight of the day:

“Wilbur started the fourth and last flight at just about 12 o’clock. The first few hundred feet were up and down, as before, but by the time three hundred ft had been covered, the machine was under much better control. The course for the next four or five hundred feet had but little undulation. However, when out about eight hundred feet the machine began pitching again, and, in one of its darts downward, struck the ground. The distance over the ground was measured to be 852 feet; the time of the flight was 59 seconds. The frame supporting the front rudder was badly broken, but the main part of the machine was not injured at all. We estimated that the machine could be put in condition for flight again in about a day or two.””

If you aren’t pumped to go out and fly one of these aircraft now in your simulator, or if you weren’t inspired into a greater appreciation for these aircraft, then I don’t know what will work!

These are aircraft to make any American proud.