Your Airplane Will Always Lose to a Mountain 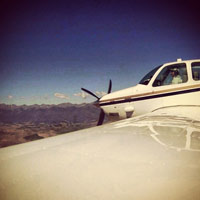 Mountain vs. Airplane. Who wins? The answer is simple, but unless you watch your thought process, plan carefully, and take the long route at times, you could become another statistic.

Several days ago, an AOA Trainee asked me a few questions about a very interesting scenario. I answered him back in several short sentences, but I wanted to expound here in an article for all to see.

The big question is: What do I do when there are massive mountains on my flight route?

Of course the easy and correct answer is, “Go Around the Mountains!”

For the sake of flight training purposes, let’s go beyond that.

“First off I would like to thank you for all your videos! I have bought your Aviator Pro and the NGX Training. (Not at the same time of course!) They really teach me to fly the right way. I do have a question though!

Recently I was planning a leg of my Around the US in a Bonanza tour on VATSIM. My route was from Eugene, OR (KEUG) to Idaho Falls Reg, ID (KIDA), and I ran into a problem with my MCA in the bonanza. The MSA was 16,000 ft and the lowest altitude I could cruise at was 17,000. I was afraid I may not be able to reach and maintain that altitude so I decided to add about 75 miles to my route and I took another airway to get there. My question is has this ever happened to you while flying? What did you do? If you haven’t had this happen, how would you have handled it? Thanks again and I’m anxious for your reply!”

Has this ever happened to me? All the time. I did most of my flying in the western USA, home of the Rocky Mountains, in single engine airplanes.

How would I have handled it? Exactly the same way Joe did!

Let me explain in more depth, though.

Controlled Flight Into Terrain. Yes, this means the pilot-in-command is in control of the aircraft and flies it into terrain, whether that be by ignorance or poor planning. The problem here is that at some point along the way, the pilots made a mistake, and they drove the aircraft into terrain.

Boeing says CFIT is the leading cause of airplane accidents which involve the loss of life, accounting for over 9000 deaths since the beginning of the jet age.

This is where careful planning for the flight comes into play, and where a deep knowledge of the aircraft your flying will help. Essentially, you’ve got to know if/how/where/when the aircraft will be able to meet the performance requirements to clear that terrain.

You can build things more in your favor by making the mountain crossing during the day, and in VMC, rather than at night or in IFR. The more you stack things in your favor, the safer you will be.

It is our job as pilots and virtual aviators to minimize risk, and in all possible situations, eliminate it.

One thing that jumped out at me about this great email right away were the altitudes involved. 17000 for an MSA is REALLY high- for the right kind of aircraft. For other kind of aircraft, it’s more or less a walk in the park.

Say in this case we assume that Joe is flying a normally aspirated piston Bonanza. Although the Bonanza has some great capability to handle a wide variety of situations, this isn’t one of them.

Theoretically it is possible to climb up to 17,000 feet in a normally aspirated Bonanza, but the engine will be gasping for air, and producing a laughingly low amount of power.

It’s safer and faster to add on the extra 75 nautical miles and just go around on a different route.

Say however that somehow Joe has a Turbo Bonanza. Heck, he could be at full manifold pressure and powering through 17,000 if that was the case! He’d also have stellar climb performance the entire way, assuming other factors weren’t coming into play.

My point is this: In a single, normally aspirated engine, this is a no go. In a turbo normalized or turbo charged powered Bonanza, this is most likely a walk in the park.

You have to ask yourself at the end of the day: Is it really smart for me to fly a single engine over heavily mountainous terrain? Or would I be better served following a lower route, which is where highways and towns usually reside?

It is an interesting question to ask, and one that deserves some thought.

But I will admit. I’ve barreled straight out of Denver on a flight to Salt Lake City plenty of times- on my own- in IFR- in a single engine.

I would say I was a little more reckless then, but I don’t feel I was taking huge risks either. It is possible to do such things, but does that really stack the cards in my favor?

Where will I land if I have issues?
Are there suitable airports along the route?
What will I do if I encounter icing?

My situation was slightly different, as I was flying a turbo-normalized Bonanza. I had a tremendous amount of power to get up to FL250 if I wanted to, and plenty of clearance with terrain to avoid things like mountain wave turbulence. Apart from that, this was my home. And I was very familiar with the available airports, and had made this passing many times before.


All the said, we need to be asking ourselves the questions:

Is it worth the risk?
Does this decision bring safety on my side?
Is there a more suitable as safer route, even if it’s longer?

At times we as pilots have to make decisions that take more time than we had planned. I believe we should lean toward the side of caution, enjoy the scenery below, and get home to our families safely.

Join the Conversation!
What would you have done in Joe’s Situation? Have you ever flown into a mountain (while not messing around) in flight simulator?