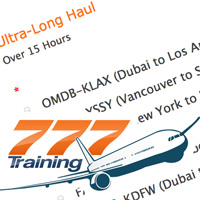 The results are in! After about a week of collecting results for the 777 FlightWork Flights, we’ve tallied the votes and we have your results. Drum roll please!

FlightWork is taught on realistic routes, and with real procedures and methods.

Dubai, in the United Arab Emirates, is largely considered to be the center of business in the Middle East. Over the last 15 years, Dubai has experienced an incredible and unprecedented growth, which only seems to be accelerating. Although most of the industry was backboned on oil, it is largely and a majority of tourism, finance, and other business in today’s world. This means people from all corners of the world are converging on Dubai, making it a very popular destination for the 777.

This Oasis of a city is not only incredibly new, beautiful, and fashionable, but sitting on the ramp at Dubai International brings with it eye candy that would make any aviation geek slobber with delight. Eccentric tastes and lifestyles deserve beautiful aircraft along with them.

Amsterdam, quite an old city, and certainly opposite in climate, is our destination on the short 6.5 hour journey from Dubai. Amsterdam is notorious for it’s artistic-rich culture, it’s well kept streets, and iconic sub-sea level channels making for a popular tourism spot.

Not only does is Amsterdam thick with culture, but the Dutch are an aviation loving people. With the iconic KLM airlines, commercial aviation here is as old as the jet age itself. Nearly every aircraft has seen regular service in this area, and the 777 is certainly not an exception.

This flight got a tremendous amount of votes, and was voted higher than any other flight we suggested.

Paris, much like Amsterdam, and perhaps to a whole new level, is thick with fashion and artistic culture. The city, and it’s country, have always been diverse in many ways but certainly always known for the finer things in life. Aviation here too has nearly always been a way of life since powered flight.

On May 21st, 1927, Charles Lindbergh completed the first Transatlantic flight, landing in Paris. “But suddenly, a hysterical, ecstatic crowd broke through the restraining ropes and stampeded toward him, cheering and shouting. As he opened the door, he was lifted down and hoisted onto the shoulders of the police, who carried him through the surging crowd, cries of “Vive” ringing through the night. He had conquered the Atlantic alone, covering 3,610 miles in 33 1/2 hours.”

Not to mention the support of Air France for the Concorde, and the birth of Airbus.

San Francisco, many hundreds or even thousands of years younger than Paris, is well known for it’s ‘silicon valley’ and high-tech industries. When you want to start a technology business, this seems to still be one of that major hotspots to incubate a startup. Home to Apple Computer and Intel Processors, just to name a very large and noticeable few, it’s no wonder why.

New York nearly speaks for itself. The famous entry to and the epitome of American Life. Millions of immigrants have passed through Ellis Island, and many more millions of visitors have walked it’s streets, taken a stroll in Central Park, or have taken pictures from the top of the Empire State Building.

Of course, New York isn’t all about fun and tourism. Business and the economy is serious business here. This is the financial capital of America, after all, with the New York Stock Exchange and countless large corporations calling it home.

Hong Kong, also a booming and quite diverse metropolis, has seen incredible growth over the last decades. As China has risen as an economic power, much of that process revolves around Hong Kong as a driving force to the economy, not so much in products made, but in deals made.

This route is particularly interesting because it is so long, in addition to being a Polar Route, or a route flown over a pole (the North Pole in this case. That makes for some very interesting operational procedures.

We’re really excited about these flights! The results really surprised us, as we were expecting some of the more famous 777 routes to win. However, all of these routes are unique and offer something different and challenging. We can’t wait to get a hold of the PMDG 777 and get started on this all-too-important flight training so you can get started right in the aircraft.

Join the Conversation!
Are you guys pumped for these flights? What are some things you look forward to learning in the 777 Training?? 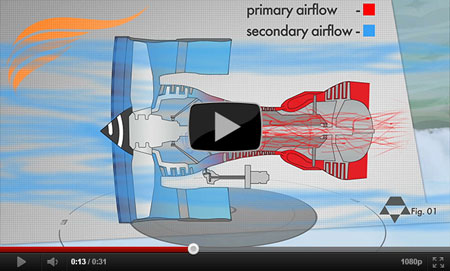