Why You Should Have a Yoke, Throttle and Rudder Pedals 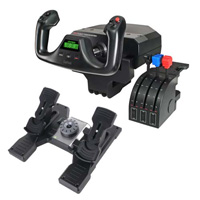 Are you guilty of flying with your keyboard? Do you have a joystick that has the rudder built in (by twisting)? Have you held off on getting rudder pedals because it just doesn’t seem necessary?

If you ask virtual or real pilots who have all three, yoke- throttle- pedals, they’ll tell you that you simply can’t live without. When you have all three, it completes your realism. It’s the Tried and True Trifecta.

To fly without all three is unrealistic.

Now, I know that the majority of you reading this are going to have all of these controls. Most of our pilots here at AOA take their simulations very seriously, otherwise they wouldn’t be training to learn how to fly them properly.

That said, at AOA we also have a lot of simmers just starting out. Aviator90 sees a lot of newcomers into Flight Simulation. If you are a newcomer, or you don’t have all of these controls, read on and I will lay out some compelling reasons why you need all three controls.

Here we go. Why You Should Have a Yoke, Throttle and Rudder Pedals.

Unless you are flying an Airbus or a helicopter, you need to have yoke. A yoke is the golden standard in aviation. This is the control that you’re going to spend the most time using. Plus, here at Angle of Attack we aren’t huge fans of just engaging the autopilot or using AUTOLAND all the time. We think you should have a good feel on the controls, and a lot of practice hand-flying. You can’t do that without proper time spent actually using those controls.

Out of all the controls, a yoke should be the first control you purchase.

If you’re in the market for controls, here is what is AOA Recommended:

At one time, I had a CH Products Yoke. Although the yoke stood the test of time, eventually it just felt really cheap and unrealistic to me. The CH Products Yoke does have it’s advantages, the biggest being the lowest cost, getting you a yoke on a budget.

However, compared to other yokes available, the CH Products Yoke comes in just a hair below others on quality.

Learn More about the CH Yoke*

This yoke comes highly recommended from Angle of Attack. It’s well built, controls well, and it even comes with a separate throttle. Using these controls has proved to be well worth the money and investment.

The buttons have a fantastic and intuitive layout, the yoke is built from great materials, and the digital display screen can serve many functions.

If you’re looking for something super solid that won’t break the bank, and something that feels realistic, these controls are for you. These are the controls we’ve used for the majority of the training you see at Angle of Attack.

If you’re not ok with plastic on your controls, and you simply want controls that are modeled exactly like the real thing, then look no further than GoFlight. These guys make controls and panels for only the most serious virtual pilots. In fact, much of their stuff is sold to flight schools and other outfits that use simulators for training purposes.

I had the chance to try out one of their controls recently, which is a 737 Yoke. Man, what an incredible piece of hardware! This stuff is all metal, has a totally realistic feel, and handles like a dream. If I was rollin’ in the Benjamin’s, I’d totally get one. But for those simmers with deeper pockets, this is a no-brainer.

There’s nothing like having a throttle for each engine on your 747 (4 engines) in addition to a speedbrakes and a flaps lever. Pushing the throttles forward, selecting TO/GA, and managing all of the pedestal functions right there on the throttle.

It’s a dream you can achieve, though. With several throttles out there on the market, you can get another great step in realism by being able to control your power, secondary flight controls, and more.

If you’re in the market for a throttle, here is what is AOA Recommended:

The CH Products Throttle, like the Yoke (and later the rudder pedals) only come in as the “Good” for several key reasons. First, is price. This throttle is stand-alone and quite expensive! In fact, you may pay more for the throttle than you will have the yoke and pedals combined.

That said, the yoke does have 6 axis right out the gate, which sets it apart from the Saitek Throttle. If you’re a 747 driver, that might appeal to you.

Like the other CH Products, this throttle is made mostly of plastic and just doesn’t have the feel of industrial quality. But it is the first throttle I had ever had, so it has a special place in my heart.

First off, the Saitek Throttle actually comes WITH the Saitek Yoke by default. That alone is a huge benefit! The two are priced very low, when compared to adding together some CH Products controls.

This throttle is well built, and can sit high or low on your desk with an adjustable bracket on the back.

However, this throttle only has 3 axis. This makes it work for traditional single engine aircraft with a power, pitch and mixture. If you are flying virtual jets, you’re going to want to pick up another throttle, which can then be connected together, and operate that way.

Learn More about the Saitek Throttle*

Come to expect nothing more than quality and fine manufacturing when mentioning GoFlight. This throttle, when coupled with the yoke, gives you an incredible flight experience, especially if you’re flying the 737 (which is quite popular).

Made of metal and a robust internal system of pulleys and mechanical functions, this feels like the real deal. Also built in are several buttons for TO/GA which just cannot be matched by the CH Products or Saitek systems.

Learn More about the GoFlight Throttle

The day I got rudder pedals I was completely taken aback by how much more realistic it was to have to taxi with my feet, rather than just turning the yoke (actual aircraft are steered with the nosewheel, rudder, and sometimes main gear via the rudder pedals).

My guess is that most of you have a yoke and throttle, and you feel you’re more or less set. I would also guess that there are many people out there that just haven’t bothered with rudder pedals. My friend, you are missing out. Rudder pedals will add a surprising amount of realism to your simulation!

Especially when you start doing engine out procedures, and flying aircraft without yaw damper, you’ll find these rudder pedals to be incredibly immersive.

These were the first set of rudder pedals I had. Although they did the job and I experienced a whole new level of realism, they just aren’t built well, are far too light, and don’t feel ‘realistic’ with their resistance. There is essentially no resistance when pushing the pedals.

However, if you’re running on a budget and you feel like you’d be okay with these pedals, than it’s better to have them than to not have them.

Over the past several years I’ve been using Saitek Pedals for all the AOA Training videos, and feel like they are the best bang-for-the-buck. They are well built, have an adjustable resistance knob, and have seemed to hold up well to the test of time. I’m well pleased. They work, they feel a lot like the real thing, and they compliment the other Saitek products well.

Not a whole lot to say here other than: these are awesome.

If you’re serious about realism, which I’m guessing you are, you need all three controls. If you don’t have all three controls, I would suggest you make plans to get all three. Forego buying any more addons before you take this step, as it is extremely important.

You’ll notice that there are several price levels. Although CH Products are cheaper, I’d also suggest waiting a little longer to get the higher quality controls from Saitek. Should you hold out and save for GoFlight? Probably not, unless you can really afford it.

Right now, just focus on getting setup with something that’ll work great. Later you can get some super nice controls if you have the coin.

Join the Conversation!
What flight controls do you have? Share your experience of getting your new controls.